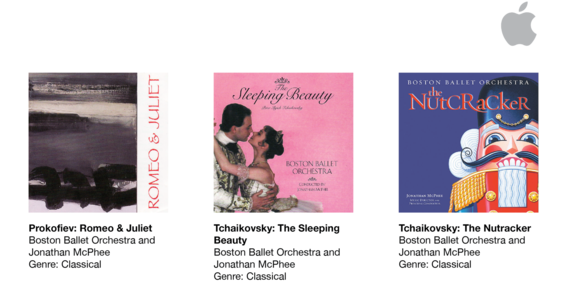 “Boston Ballet has produced another of its own recordings, this one of the Boston Ballet Orchestra conducted by Jonathan McPhee playing nearly 80 minutes of excerpts form Prokofiev’s ‘Romeo and Juliet.’ Theirs is a warm, supple, ever-so-slightly understated version of this elegant music. McPhee takes a refined, moderately paced approach that emphasizes the music’s sheer beauty over its dramatic purpose— an approach that proves most successful for contemplative home listening, especially considering the playing of the Boston Ballet Orchestra which is nothing short of splendid.”

Jonathan McPhee, The History of the Orchestra Program for Young People

“Dynamically conducted by Jonathan McPhee, the CD . . . of ‘Sleeping Beauty’ is certainly no snoozer. . . . McPhee, the company’s music director and interim artistic coordinator, has a flair for theatrical effect, dance rhythm and accent that resounds in every bar of Tchaikovsky’s score. . . .The sense of engagement and movement is so persistently strong that one can almost visualize the choreography. The standard of playing is consistently high, with noteworthy contributions from woodwind and brass.  There are first-rate solos by cellist Ronald Lowry and violinist Michael Rosenbloom . . . Recorded in 20-bit digital stereo, the CD offers a bright and clear acoustic.”
—Peter M. Knapp, The Patriot Ledger

“. . . McPhee’s leadership of this orchestra in this music [Sleeping Beauty]—truly Tchaikovsky’s masterpiece—has been one of the glories of Boston Ballet. . . . [On this CD] Boston Ballet Orchestra plays at its usually high level. And solos by violinist Michael Rosenbloom and cellist Ronald Lowry are what we’ve come to expect from these excellent orchestra principals. McPhee has a real gift for subtly emphasizing inner voices in the music that add special color to the most familiar passages.”
—T. J. Medrek, Boston Herald

“This recording has ideas, perceptions, nuances (the buildup to the Christmas Tree Forest tableau climax, the reedy winds in Coffee, the delectable celeste in Sugar Plum’s variation) that you won’t find elsewhere—and you could spend big bucks looking.”
—Jeffrey Gantz, Boston Phoenix

"The best Nutcracker orchestra in the country….”
—Newsweek